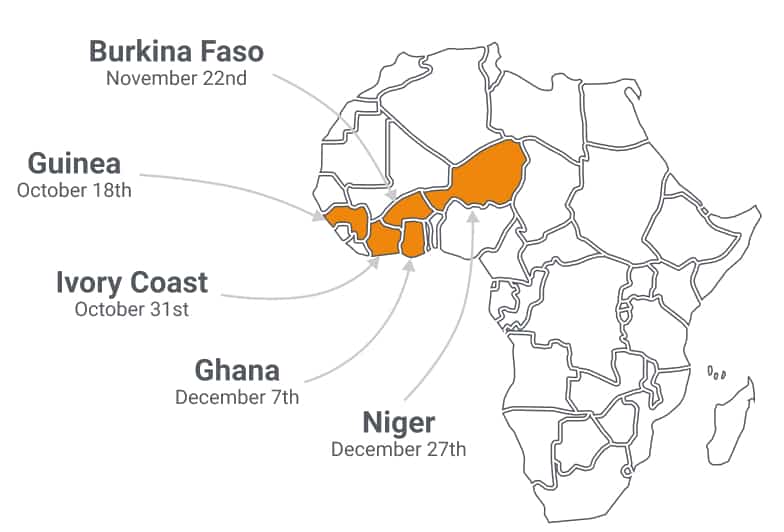 Update on West Africa: Elections, instability and impact on markets

Update on West Africa: Elections, instability and impact on markets


Many events are happening and about to happen in West Africa:

President Ouattara won the presidential elections with a score of more than 94%. The opposition is contesting the results and created a National Council for the Transition. Violence took place in several parts of the country, but international organisations are calling parties to respect the constitution and to dialogue in order to settle the situation in peace and preserve lives.

Last weekend, and yesterday, demonstrations caused the death of at least three people, and dozens are injured. The call of the opposition to boycott the presidential elections at the end of the month, created tensions between ethnic groups. This weekend, Agnis and Doulas confronted themselves violently at roadblocks that were put in place by partisans of the opposition of the president to stop the campaign.

In general, the situation in West Africa is very active. Five presidential elections are scheduled until the end of the year; in Guinea, Ivory Coast, Burkina Faso, Ghana and Niger. In this article, the author worries about democracy in countries where elections are regularly controversial and sources of tensions.

In Guinea, the situation is similar to Ivory Coast. The current president, Alpha Condé, is a candidate to be re-elected for a controversial third mandate which is officially not allowed by the constitution. Tensions have been rising in the country; multiple demonstrations, arrests, and violence occurred in the past year.
Presidential elections are also scheduled in Burkina Faso and Niger; countries where Jihadism and terrorism are increasing.
On top of this, the recent coup in Mali also brought tensions to the region. Until yesterday, the ECOWAS was holding an embargo against the country. Now the new government has been chosen but the choice of four militaries in strategic ministries is provoking complaints.

Update about the situation in Ivory Coast

One month ago, we published a post describing the situation in Ivory Coast and the tensions related to the presidential elections. We explained the potential impact it could have on the cashew market. This is an update on the situation.

Candidates were announced on September 16th and four propositions were accepted over 44 applications. The application of the ex-president, Laurent Gbagbo (2000-2010) and the ex-minister Guillaume Soro have been rejected. The four candidates are:

Disappointed candidates whose applications have been rejected (partisans of Gbagbo, G. Soro, but also candidate H. Konan Bédié) called for civil disobedience. They now argue for a postponement of the elections.
After the announcement of the candidates, 2 of the 4 members of the institution in charge of selecting the applications left their seats. It is raising concerns about the impartiality of the institution and enhancing the frustration of the opposition.

The international scene is still worried about the stability of the country during this period of the presidential election.

⇒ In September, an observer from the UN spent one week in the country visiting the different candidates and parties. He called Ivorians to act in “synergy and dialogue to preserve unity and peace”.
⇒ Yesterday and today a joint delegation of representatives of the UN, ECOWAS and the African Union are visiting the candidates.
⇒ Humanitarian organizations are preparing action plans for the elections because of the concerns about the stability of the country.

In the meantime, the current government is conducting several actions that can be perceived as promotion for Ouattara’s campaign: