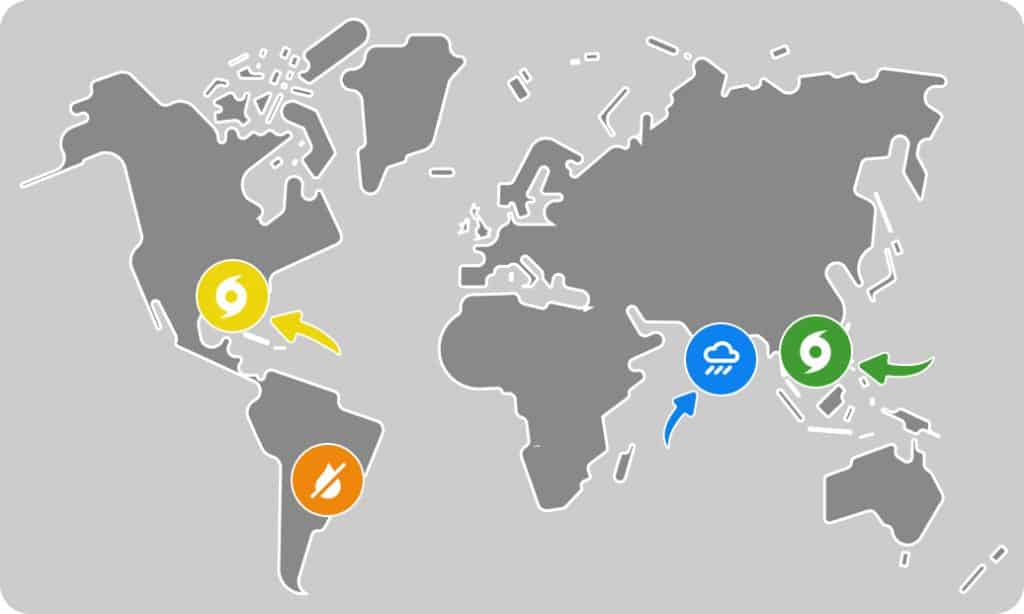 Worldwide, the weather in the last months of 2020 is influenced by the presence of La Niña, causing extreme climatic events. Besides human casualties and material damages, there are also consequences for cashew and peanut productions. Here is an overview of the current situation in Vietnam, the consequences of the Monsoon in India, the effect of hurricane season in the USA and the contrasting drought in Latin America.

Since mid-October, Vietnam has been experiencing multiple meteorological events that brought heavy rains and strong winds to the Central and Northern coasts, provoking devastating floods and landslides, mostly in the Central region of the country.

On October 11th, almost immediately after some intensive monsoon rains that already caused floods in the area (from October 6th to 9th), tropical storm Linfa landed in the province of Quảng Ngãi. This storm released historically high precipitations, causing floods and landslides, destroying buildings and roads. But the biggest losses are expected in agricultural production, with thousands of acres of lands cultivated with rice and vegetables devastated. A few days later, tropical storm Nangka and tropical depression Ofel landed respectively in the Northern and Central regions, bringing strong winds and additional rainfalls to areas that were already flooded.

Typhoon Molave just landed in Central Vietnam this morning, Wednesday, October 28th. Although the target was supposed to be 1.3 million, more than 40,000 people had been evacuated inland before the storm arrived. The typhoon brought winds over 150 kph (93 mph) and caused additional damages and human casualties in a land that was already flooded.

In a context where the Covid-19 pandemic already weakened the local economy, the recent climatic events are impacting millions of Vietnamese citizens by damaging their homes, roads and agricultural lands. The government, along with international organizations, granted funds for immediate humanitarian assistance to aid and cope with the consequences of the floods.

These disasters that occurred consecutively in a short period of time may be related to the presence of La Niña. The phenomenon usually increases rainfalls in the south-eastern Asian region, including Vietnam. Some scientists also argue that it causes typhoons to land more south than what is generally observed, meaning in Southern China or Vietnam instead of Japan or northern China. But ENSO is not the only climate variable influencing rainfalls in Asia, and it is difficult to affirm with certainty that the current disaster occurring in Vietnam is a direct consequence of La Niña.

Most of the floods and landslides occurred in the Central region of Vietnam, damaging rice and vegetable fields but sparing cashew orchards. Indeed, the main cashew producing regions are located more to the south of the places where the tropical storms landed. Therefore, the amount of rain received was less significant, and it did not cause too much damage.

Not only in the last weeks, but during the past months, Vietnam experienced above-average rainfalls, providing enough water to the crops, including the cashew trees. The typhoon season, that usually lasts from June 1st to the end of November, is now expected to slow down, to allow the dry season to start. This would be a relief for the areas that have been heavily affected by the floods, but it is also imperative for cashew farmers. Cashew trees require dry and sunny weather to flower from December onwards. (Read here our latest cashew market report for more information.)

In India, the monsoon season is finally ending for this year. For the second consecutive year, and just like in Vietnam, this year’s season was marked by lots of rains. They caused floods and landslides in several parts of the country.

This year’s significant monsoon rain could be related to La Niña. As previously mentioned, it is common that the phenomenon results in more rain in south-eastern Asia, including in India during the monsoon season.

The impact on the Kharif peanut crop is difficult to estimate because of the diverse information from different sources. It seems that the heavy rains and floods resulted in hefty crop losses. Nevertheless, several sources mention that India widely increased the area cultivated with peanuts this season compared to previous years. It is a possibility that the yield losses will be compensated by the increased area planted with peanuts, to end up at a near-average production.

Regarding the cashew crop, the impact of the monsoon is yet unknown but, as the flowering season has not started yet, the production will most likely not be affected. Therefore, just like in Vietnam, we believe that the trees received sufficient rain, and if the dry season starts promptly, the 2021 cashew crop could have a good start.

In the south-eastern USA, the Atlantic hurricane season usually lasts from June 1st to November 30th, with a peak from mid-August to late October. Therefore, although the season is not over yet, the majority of the hurricanes and tropical storms are already past us for this year. And that’s a relief because the season was eventful enough! It is the second time ever that the list of names was exhausted and that storms had to be named after the Greek alphabet. This only happened once before; in 2005. Luckily the storms have been less devastating than in 2005 when Rita and Katrina hit Louisiana.

The intense hurricane activity of this season is most likely related to the presence of La Niña. Indeed, the climatic phenomenon reduces the wind shear over the Atlantic Ocean and therefore facilitates the appearance of hurricanes. Luckily, although there have been many storms and hurricanes, the damages were not too severe.

Late August, hurricane Laura made landfall in Louisiana and then quickly weakened in a tropical depression causing less damage than what was initially feared. Hurricane Sally made landfall in September in Alabama and the Florida Panhandle. It originated in losses in cotton fields and delayed the peanut harvest. Peanut crops in the Florida Panhandle were badly impacted by the hurricane. Nevertheless, damages remained geographically bound to specific areas, and the leftovers of the storm provided some much-needed rain to other areas in the south-eastern regions.
Delta landed later in Texas and provided some rain for the peanut crops in Louisiana, Mississippi and Northern Alabama.

This year’s weather was favorable to the peanut crop in the south-eastern part of the country. The storms and hurricanes that landed in the peanut region overall brought more beneficial rains than it caused losses in the fields. However, it generally delayed peanut digging and harvesting. The crop quality is expected to be good, and record-high quantities are expected in some states; like Georgia, which is the largest producer.

In Texas and Oklahoma, the weather was less favorable to the peanut crops, with the largest part of the season marked by severe to extreme drought, impacting the quality and quantity of the crops. 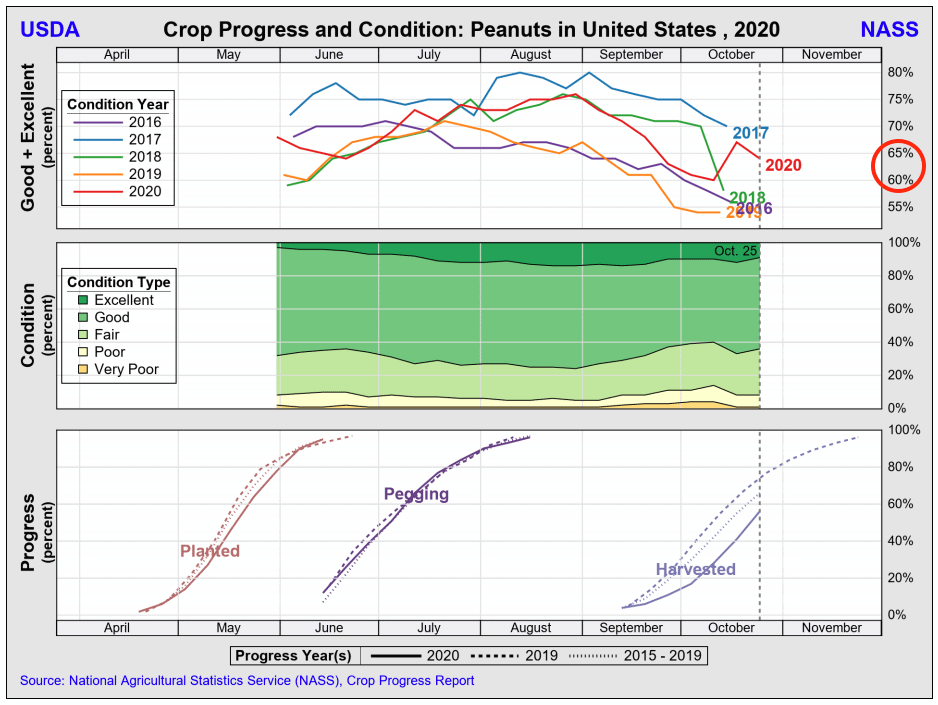 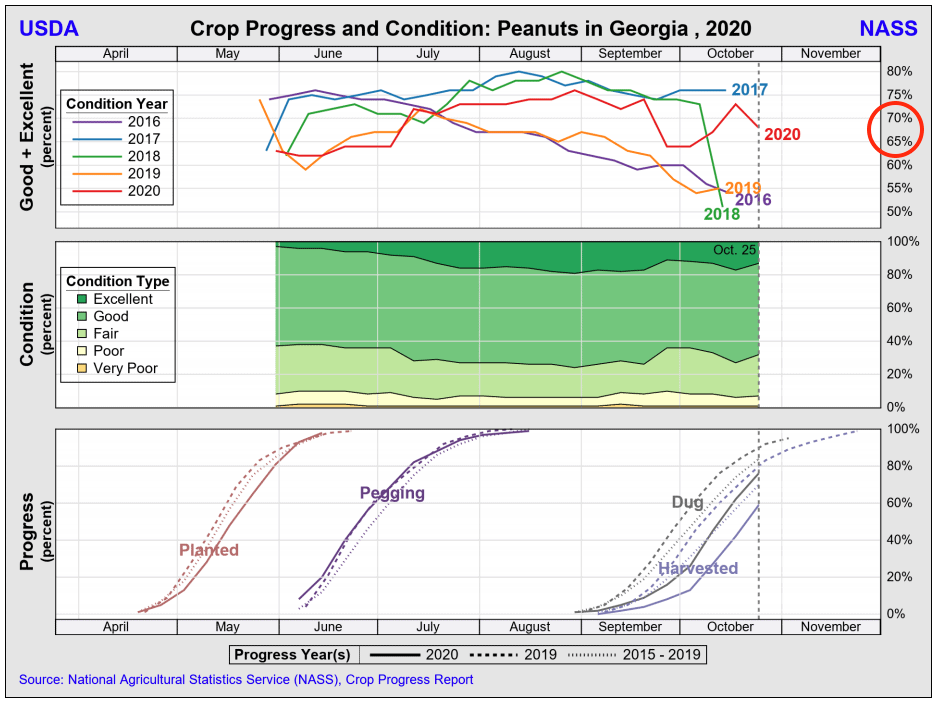 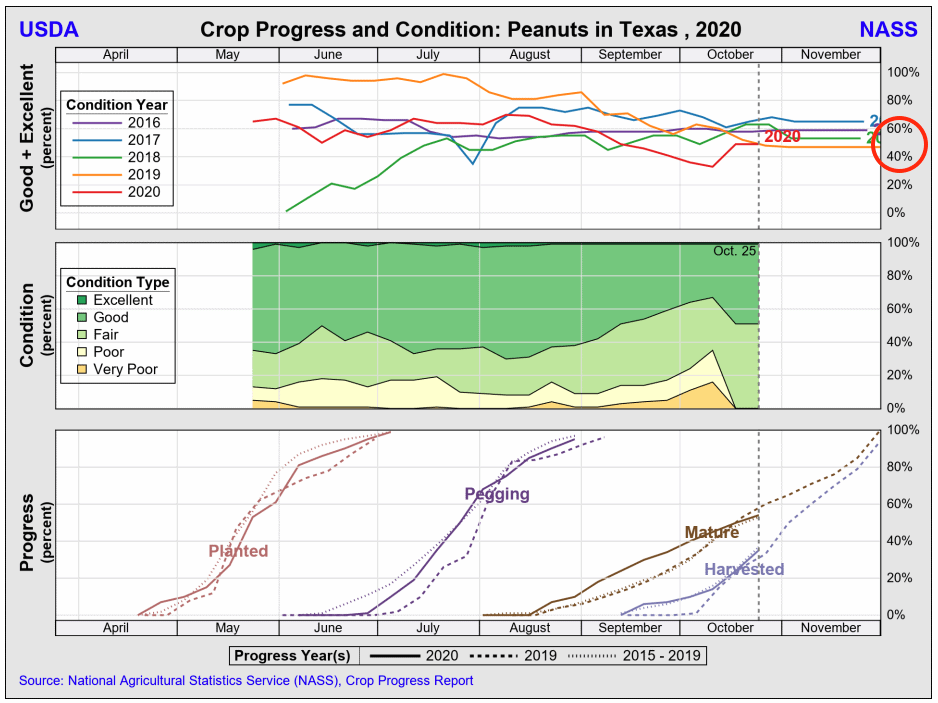 Drought and delayed peanut plantings in Brazil and Argentina

In contrast to Southeast Asia, Latin America (and especially the peanut areas in Argentina and Brazil) is experiencing severe drought. The winter crop in the central regions of Argentina barely received any rains from May to mid-October. It resulted in heavy losses.

Because of this drought, peanut plantings have been delayed in the producing areas in Brazil and Argentina. Fortunately, in the past two weeks, some rain finally reached the fields allowing for some plantings to be made. (Read here our latest peanut market report for more information.)

This drought is likely to be related to La Niña. The phenomenon usually results in drier weather in the regions cultivated with peanuts in Latin America. Unfortunately, La Niña is expected to remain present, at least until the end of the first quarter of 2021. Therefore, it could mean that the drought would continue until the end of the year. But nothing is certain yet, because the consequences of ENSO are very variable from one phenomenon to the next. We still hope that more rain will come in the coming weeks, to allow for the peanut plantings to be finished in Argentina and Brazil and that showers will keep on irrigating the fields regularly throughout the season despite La Niña.