Cashew trade is somewhat complex. Cashew trees can grow in a wide variety of conditions. But, in order to give a good production, the tree does better when located in sandy soils, in areas that receive a lot of sunshine, and at an altitude inferior to 600 meters. To be productive, cashew trees require at least 500mm of rain during the wet season and a pronounced dry season of 5 to 7 months during which they will flower and produce fruits.

Therefore, most of the worldwide cashew production takes place in tropical climates. West Africa, with Ivory Coast leading the way, accounts for almost half of the world production of Raw Cashew Nuts (RCN). However, the processing capacity of the RCN into kernels on the continent is limited. Most of the RCN are being exported to India and Vietnam for processing. Although India is a major consumer of cashew nuts, a large part of the RCN processed into kernels are being exported from Asia to Europe, the United States, or China for consumption. Consequently, cashew nut travel a long way, through several continents before reaching consumer markets. 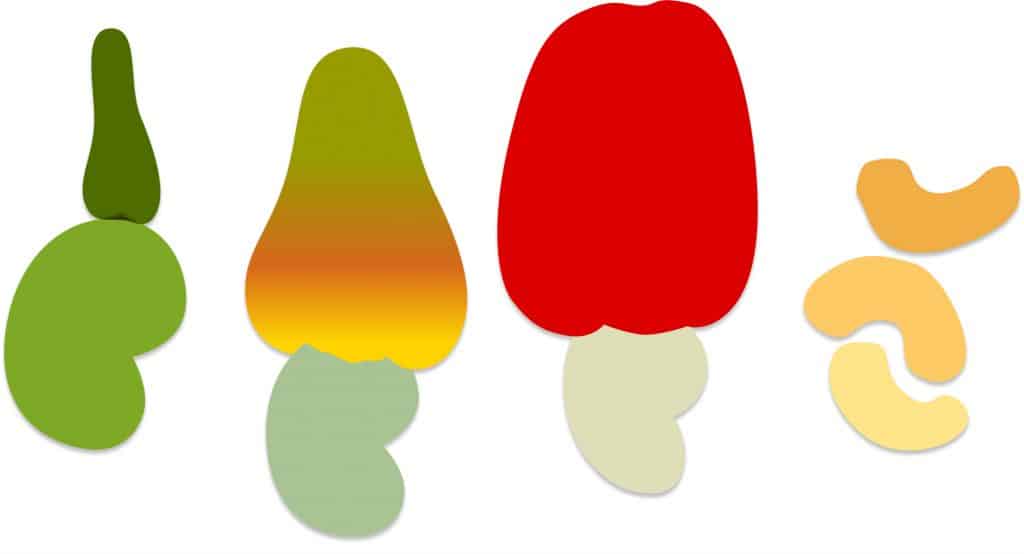 The multiple movements of cashews along the chain between the producer and the final consumer have a large environmental impact. The carbon footprint of cashew nuts is relatively high compared to other nuts because of the transits through several countries and continents. The establishment of processing factories in large production areas could allow a more direct chain, and with that, a reduction of the carbon footprint. 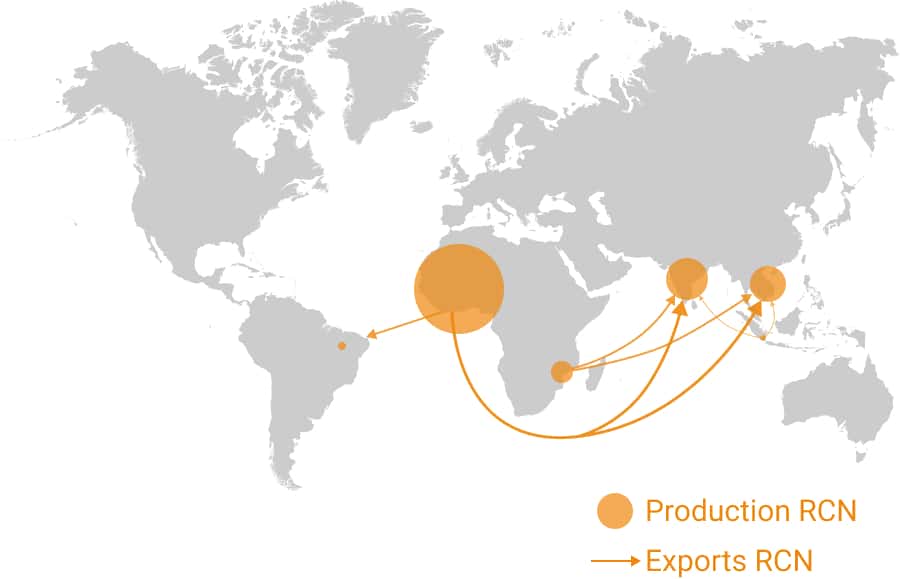 Cashew nut production on a large scale started in the 20th century. The cashew tree originates from South America and was exported to other continents because of its extensive root system that can help preserve soils. In the second half of the 20th century, the largest producing areas were located in India, Brazil and East Africa. By the end of the century, because of political issues, production in East Africa was reduced to a fraction of what it used to be. In Brazil, the production became smaller and smaller due to lack of investments in orchards in combination with bad weather for 5 to 7 years. In India, cashew production grew steadily.

Vietnam quickly became a competitive player in terms of processing. Since the 1950s, India was already sourcing RCN from Africa. But by the beginning of the 21st century, both India and Vietnam sourced large quantities of RCN outside of their own lands as their processing capacities exceeded their domestic production.

Because of the favorable climate and the increasing demand for RCN from Eastern Asia, cashew production grew exponentially in West Africa since the beginning of the 21st century, up until now. Today, Ivory Coast is the largest producer of RCN with an estimated 900,000 tons for this year’s crop. 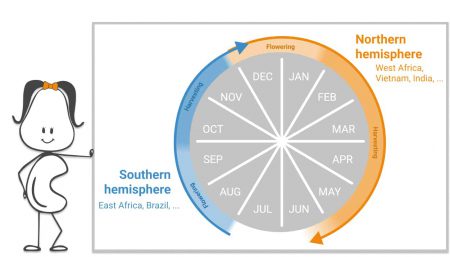 In East Africa, cashew production is still significant in Tanzania. Mozambique is now relatively small compared to its neighbour. However, this region, along with Brazil and Indonesia, presents the advantage of harvesting cashews in a different period of the year than the Northern hemisphere. Cashew harvesting takes place from September until December, meanwhile in West Africa, Vietnam, and India the season runs from January until May.
This differentiation in harvesting periods allows smaller production areas like East Africa and Indonesia to find a market for their products. For instance, this year, while the product ended in West Africa, buyers were able to source their RCN from Indonesia and Tanzania, despite much higher prices (see market report September 2020 / October 2020).

Processing of RCN into kernels 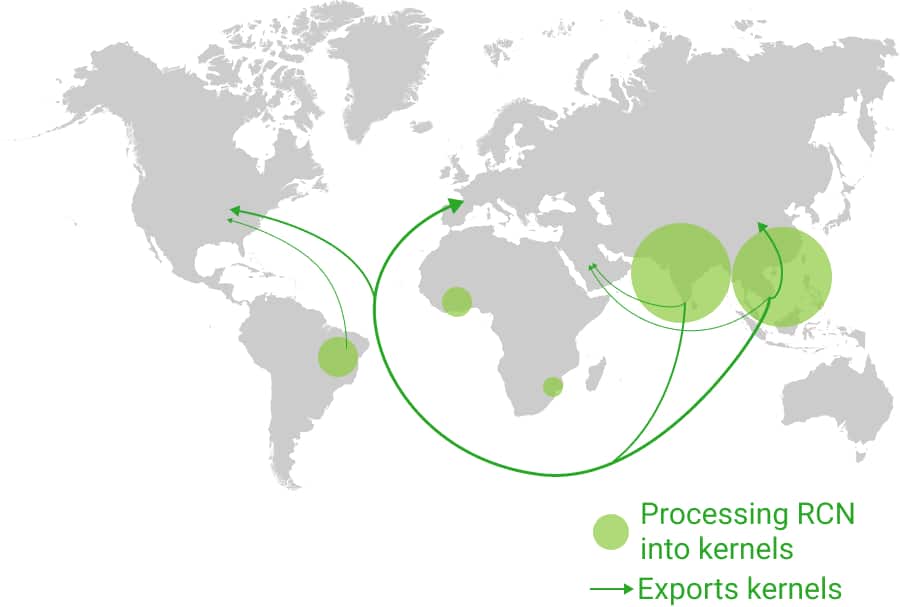 Nowadays, cashew processing is almost fully automatic. The cashew fruit is an indehiscent fruit with a strong shell. Therefore, it is difficult to extract the nut from the shell. Moreover, the shell contains a corrosive liquid: the CNSL, that was harming the hands of workers who used to shell the nuts manually. Because of this, and also to achieve a higher productivity rate, machines replaced workers in shelling factories.
Cashew grading can be done automatically or manually. Grading machines are expensive, but allow to produce a more regular product than visual/manual grading.

Vietnam and India are depending on Africa’s RCN production to get enough raw material for processing at full capacity. Although both countries are producing cashew nuts themselves, their harvest is smaller than their processing capacities. Vietnam also sources RCN from its neighbouring country Cambodia.

However, for the past half-decade, West Africa, and especially Ivory Coast slowly started developing its processing industries. Indeed, the exports of RCN to Asia for processing can be perceived as a loss for the local economy. Developing the processing industry allows to add value locally and to have a shorter value chain to reach the consumer. Processing industries generate employment in countries where a large part of the population doesn’t have a stable job. Therefore, the Ivorian and Ghanaian governments, with aid from international donors, are now trying to promote the establishment of processing factories to develop the sector and to keep adding value locally rather than by exporting the raw product. 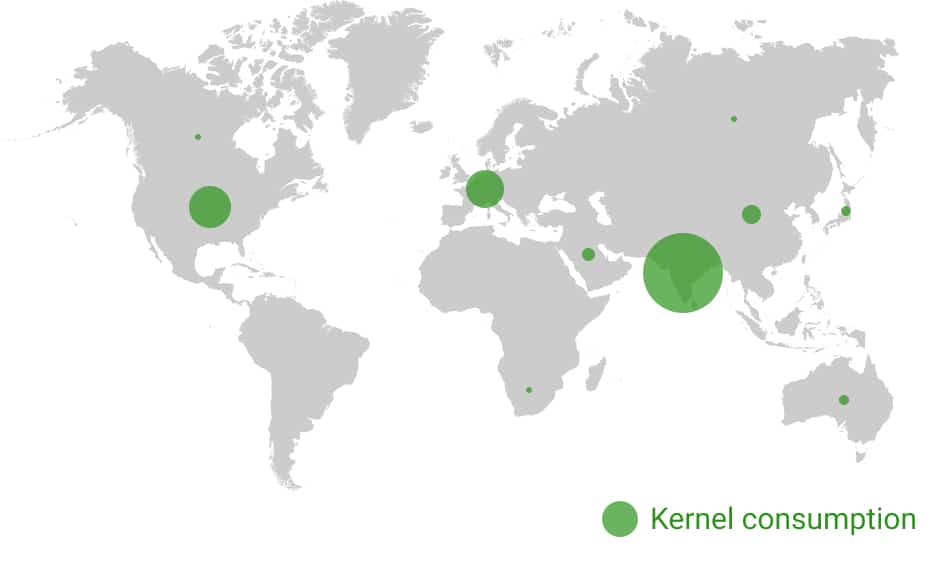 India is not only a producer and processor of cashew nuts but also one of the largest consumers. For instance, a lot of nuts are usually consumed during the Indian festive season at the end of the calendar year. Cashews are widely appreciated and are also part of several traditional meals.
Cashew nuts are also becoming more popular in Western diets. They are appreciated for their nutritional values and are ingredients in many vegan meals. Therefore, from Asia and Africa, cashew kernels are exported to Europe, the USA or either China.